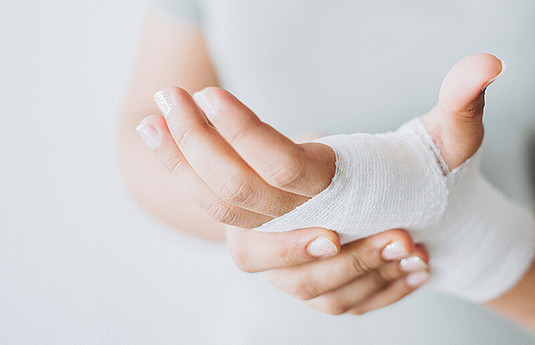 The Effect of a Bone Tunnel During Ligament Reconstruction for Trapeziometacarpal Osteoarthritis: A 5-Year Follow-up.

To compare in trapeziometacarpal (TMC) osteoarthritis the effects of trapeziectomy with tendon interposition and ligament reconstruction (LRTI) with or without a bone tunnel after a mean follow-up of 5 years.

We randomized 79 women (aged 40 years or older) with stage IV TMC osteoarthritis to either trapeziectomy with LRTI using a bone tunnel (Burton-Pellegrini) or a tendon sling arthroplasty (Weilby). Before surgery and at 3 months and 1 year after surgery, patients were evaluated for pain, function, strength, satisfaction, and complications. Of these patients, 72% were evaluated after a mean follow-up of 5 years (range, 3.8-6.4 years).

There were no significant differences in function and pain (Patient-Rated Wrist and Hand Evaluation) between treatment groups after a mean follow-up of 5 years. In addition, grip and pinch strength, satisfaction, and persisting complications did not differ between groups. Three patients in the Weilby group had repeat surgery (2 for symptomatic scaphotrapezoidal osteoarthritis and 1 elsewhere) and one in the Burton-Pellegrini group operated on again elsewhere. Furthermore, 3 patients who were first conservatively treated for a trigger finger or neuroma were operated on again because conservative therapy failed. Two more patients were operated on again because of de Quervain tendinitis and carpal tunnel syndrome. The overall treatment effect of both groups together showed no significant differences between results at 1 and 5 years after surgery, except for grip strength, which improved for both groups.

This study showed that improved function, strength, and satisfaction obtained at 1 year after trapeziectomy with LRTI with or without the use of a bone tunnel for stage IV TMC thumb osteoarthritis was maintained after 5 years.